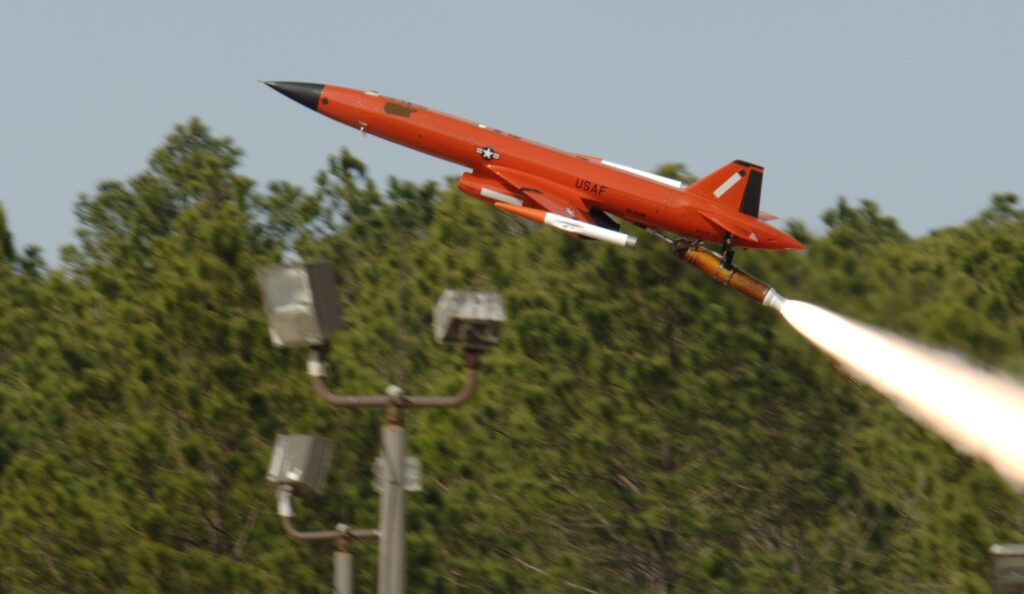 Perhaps most importantly, new Northern Command head Gen. Glen VanHerck told reporters this evening, the demo convinced him that artificial intelligence-driven software systems will be able to actually make recommendations that commanders can rely on to make decisions about what they need to do to prosecute a fast-paced battle with peer competitors China and Russia.

“I am not a skeptic after watching today,” he said.

Air Force acquisition czar Will Roper told reporters during the same briefing that one of the exercise’s big successes was the shoot-down by a novel hypervelocity projectile of one of the surrogate cruise missiles, played by BQM-167 target drones flying over White Sands Missile Range in New Mexico. The small projectile, which can fly at Mach 5, was developed by the Navy and the Army, he said, and was launched from an Army M109 Paladin-based 155mm howitzer and a Navy deck gun during the demo.

He added that the hypervelocity weapon for missile defense was “near and dear to my heart,” because the development effort actually started under DoD’s Strategic Capabilities Office in 2013 when he was leading it.

Other shooters involved included the venerable AIM-9 air-to-air missile, launched by F-16 fighter jets and MQ-9 Reaper drones. But the AIM-9X also was lobbed for the first time from a ground system, one NORTHCOM officer told reporters yesterday at Andrews AFB. The command led scenario planning for the demo, that also include Space Command and Transportation Command, as well as all five services.

But the “star of the show,” Roper said, was the way data was used to enable the kill chain using both 4G and 5G networking and the cloud to produce a kill chain “that took seconds, not minutes.” He noted that there were some 60 different types of data feeds utilized in the demo.

VanHerck concurred that the information sharing aspects of the demo was key as far as operators are concerned.

“From my perspective, this is all about domain awareness,” he said. He said he was most impressed by the ability to share domain awareness data from all domains among Combatant Commanders “in a common place where that information can then be utilized by decision-makers from a strategic level all the way to the tactical level.”

While the first ABMS “on-ramp” held in December 2019 focused on proving capabilities to link sensors via machine code, this larger much more ambitious demo was focused squarely on the command and control (C2) element of a fight, according to the NORTHCOM briefers.

As Breaking D readers know, the goal of the multi-faceted ABMS effort is to develop the backbone connections required to build a military Internet of Things (IoT). That military IoT, in turn, would enable the US military’s future Joint All-Domain Command and Control (JADC2) network of networks to combine data from multiple sensors across all domains, create a common operational picture (COP) and allow commanders to choose and assign shooters to targets via direct machine-to-machine links, all in minutes, not the hours or days needed today.

The move to “bring direct action on board for the first time” in today’s on-ramp was “one of the key innovative leaps that’s happened since December,” one NORTHCOM officer said.

“We got a lot of feedback from the first one — ‘You keep saying JADC2, but so far you’ve been really only talking about JADSA, JAD situational awareness. So where’s the C2 in what you are doing? This isn’t any good to me if I can’t tie it into something that can direct action’,” he explained.

The officials explained that the problem ABMS is trying to solve is that the technology available to commanders today for “domain awareness, command control, and deterrence to defeat” of threats is outdated and incompatible.

In particular, sensors are stovepiped — one person sees one radar; another sees “blue force” tracking data, etc. — but nothing is integrated. Instead, “we play a 12-minute-long telephone game” with individuals calling each other. “And the only time that all of that data ever comes together is in the mind of the O-6 [the rank level of an Air Force colonel) at the command and control center who is making the decision,” one briefer said.

The scenario for the demo started with Russian action against US interests overseas, resulting in US force movements designed as deterrence measures. (“Things get sporty with Russia,” on participant quipped.)

The situation quickly escalated to include cyber attacks, then jamming and laser dazzling of US communications and imagery satellites. Finally, six ‘Russian’ conventional cruise missiles were launched against the homeland from the air and sea.

The action was scripted in four phases, one participant explained. The first focused on early indications and warnings, the phase during which the Intelligence Community usually leads the way. In phase 2, the focus was determining what “red” assets were doing — where the ‘Russian’ bombers and ships were moving for example — and figuring out their intent. The third phase concentrated on the surrogate cruise missile attacks  — detecting them, identifying them as cruise missiles and not other aircraft in the area, tracking them and then engaging them.

The ABMS program refers to the various products linking sensor data and finding targets to create of an all-domain COP for commanders “omniaONEs.” The ability to use AI/machine learning software systems to provide virtual reality-type battlefield awareness is at the heart of the ABMS effort, Roper said. He explained that there were five…