Surf's up! The next wave of cloud migration is about to hit - Jonathan Cartu Internet, Mobile & Application Software Corporation
793
post-template-default,single,single-post,postid-793,single-format-standard,qode-quick-links-1.0,ajax_fade,page_not_loaded,,qode_grid_1300,qode-theme-ver-11.2,qode-theme-bridge,wpb-js-composer js-comp-ver-5.2.1,vc_responsive

Surf’s up! The next wave of cloud migration is about to hit

30 Nov Surf’s up! The next wave of cloud migration is about to hit


Founded nearly a century ago, defense contractor Raytheon Co. wrestles with the same kind of legacy infrastructure burden as any longstanding company, but that hasn’t stopped it from embracing the cloud.

For a recent project, the company adopted the U.S. Air Force’s new Kessel Run agile software development methodology, which relies heavily upon the use of cloud infrastructure.

Developed by the Air Force in partnership with Pivotal Software Inc., Kessel Run was launched initially to rescue a $745 million contract that had produced nothing over a five-year span. Using faster DevOps development techniques and a cloud-like platform-as-a-service enabled Raytheon to dramatically cut delivery times.

“What took years now takes months and days,” David Appel, vice president of defense and civil solutions at Raytheon, said at the VMworld conference this year in an interview on theCUBE, SiliconANGLE’s streaming video platform (below). “It’s been a fantastic journey.”

Delivering applications more quickly to the field has improved flight crew safety and enabled the Air Force to realize $200,000 a day in fuel cost savings months earlier than it would have seen using traditional “waterfall” development. For Raytheon, one of the most eye-opening benefits was its ability to find people.

“We’re finding that it’s been very easy to deploy, very easy to train people up and very easy to operate,” Appel said of the cloud platform, contrasting it to nearly extinct mainframe skills. “It’s just been fantastic from not just the technology perspective but also the cultural transformation perspective.”

Raytheon’s experience is emblematic of the way attitudes toward cloud computing are changing in the enterprise. Originally adopted mainly as a cheaper and more convenient alternative to on-premises infrastructure, the cloud today is widely regarded as an essential tool in achieving the speed and organizational agility that are fueling the scramble for digital transformation. That’s setting the stage for what many experts believe will be a massive migration of on-premises workloads to the cloud in the near future.

The next evolution of cloud computing will be explored in depth at this week’s annual re:Invent in Las Vegas, the most widely attended cloud conference. Thousands of hardware, software and service providers will be touting myriad products for paving that on-ramp to the cloud.

Show organizer Amazon Web Services Inc., the largest cloud infrastructure provider, by itself is expected to debut dozens of new products to make cloud computing more capable. One likely marquee announcement: the availability of and details about its widely anticipated Outposts hybrid-computing hardware and services tipped at last year’s re:Invent. It’s aimed directly at the coming migration, with an aim to help those enterprises forge a more seamless connection between their data centers and the cloud.

And AWS isn’t alone. Microsoft Corp.’s Azure Stack, which brings its cloud infrastructure on-premises, has been available since late 2017, and earlier this month it released Azure Arc to enable Azure cloud services to be deployed on any hardware or even other cloud providers. In April, Google LLC announced a similar approach called Anthos for its cloud services, including a cloud migration service.

By most estimates, less than 20% of enterprise workloads have moved from on-premises to cloud infrastructure. Many of those early candidates were of the “lift and shift” variety: packaged applications with few modifications running on standard infrastructure.

The next generation to transition will be applications that are “more complex and whose impact on the organization is more significant, including enterprise resource planning and supply chain management software,” said Colin Dawes, chief solution architect at Montreal-based managed service provider Syntax Systems Ltd.

“How much has your organizational effectiveness changed due to cloud computing?”
Source: Unisys Cloud Success Barometer, 2019

“When you get past 20%, you’ve crossed the chasm,” said Stu Miniman, a senior analyst at Wikibon, SiliconANGLE’s sister market research firm. “You’re past the early adopters and getting into majority.” Miniman drew an analogy to server virtualization, which took off at about the same penetration point. “Somewhere in the 20% to 40% range, there was no reason not to do it,” he said.

Craig Lowery, a research director in the technology and service provider group at Gartner Inc., believes up to half of enterprise workloads will be running on public or private cloud infrastructure within five years. “There’s been a change in sentiment from lift-and-shift to a cloud-native mentality,” he said. “It’s not about just getting things into cloud; it’s about using cloud properly.”

Although many legacy applications can’t take full advantage of cloud-native features, technologies such as cloud-based virtualization and software containers are paving the way for many to gain at least some of the benefits at little risk. “There’ll be 50 billion new applications written in next five to 10 years and most will be cloud-native,” Miniman said.

Not every workload will invariably move to cloud infrastructure. In fact, some early candidates are even coming back. A recent survey of 2,650 information technology managers underwritten by Nutanix Inc. found that 73% have shifted at least one application back on-premises from public cloud, with 22% moving five or more. International Data Corp. reported a similar trend last year.

Early enterprise cloud users found themselves in what the Nutanix report called the “messy middle,” forcing them to “find workarounds for the immaturity of cloud interoperability and mobility… As a result, the ‘devil you know’ – in this case, the on-prem, non-cloud-enabled data center — appears to have gained favor as at least a short-term solution to these issues.” 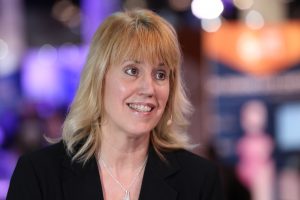 Nutanix’s Pfeiffer: “There isn’t some sort of overarching goodness about cloud.”
Photo: SiliconANGLE

“There isn’t some sort of overarching goodness…