HitPoint Studios has made its name as a work-for-hire studio. And lately, a lot of that work has been in augmented reality games. One of the prominent ones is the Game of Games the Game, a mobile app that HitPoint created for The Ellen Degeneres Show.

Ariella Lehrer, president of HitPoint in Los Angeles, said in an interview with GamesBeat that the smartphone-based AR technology is being used by fans of the TV show, which airs on NBC and is a spinoff of Degeneres’ talk show. And so far the AR mobile game is giving a big boost to the engagement levels for both the show and the app. 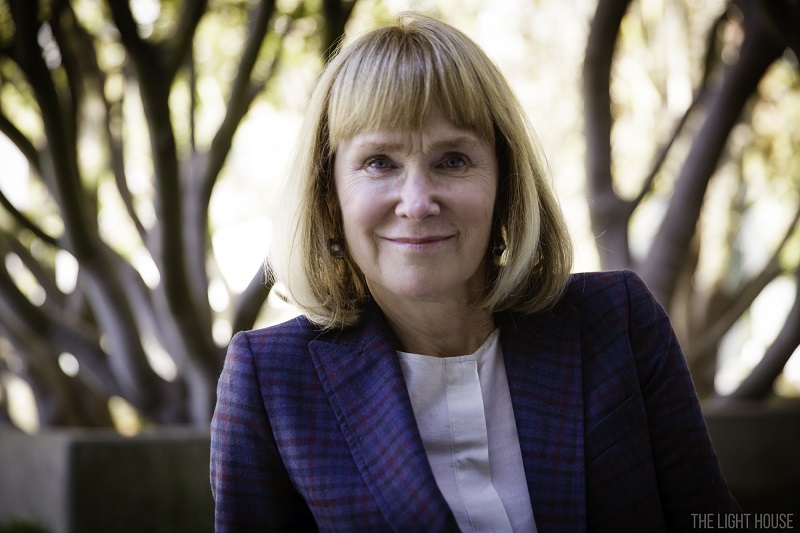 Above: Ariella Lehrer is president of HitPoint Studios.

I also watched Paul Hake, CEO of HitPoint, speak on a panel this week at the Augmented World Expo event in Santa Clara, California, with Alexa Hook, digital games producer of The Ellen Degeneres Show, and Daniel Leary, digital co-executive producer of the show.

“I feel like we’re reaching a tipping point,” Lehrer said. “There’s a lot of money in AR and VR content production. The reason I joined was to get into AR. I didn’t want to outsource that. This is what I wanted to focus on.” 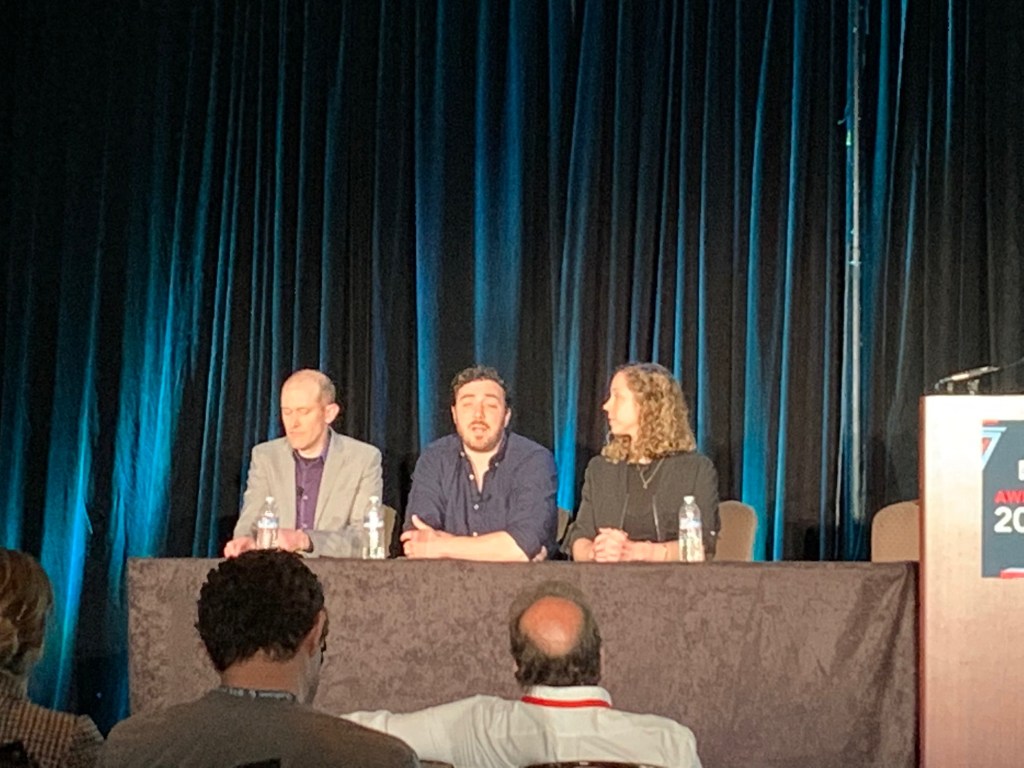 The speakers on the panel said that the audience for the AR game has engaged in 1.17 million AR activities and 198,154 have completed puzzles. More than 22 million matches have been played.

“The show was conceived to take the fun that Ellen has playing games on the talk show into a primetime show where people play games of all sorts in the face of all kinds of ridiculous peril,” Leary said. “There’s some luck and there’s some skill and a whole lot of fun.” 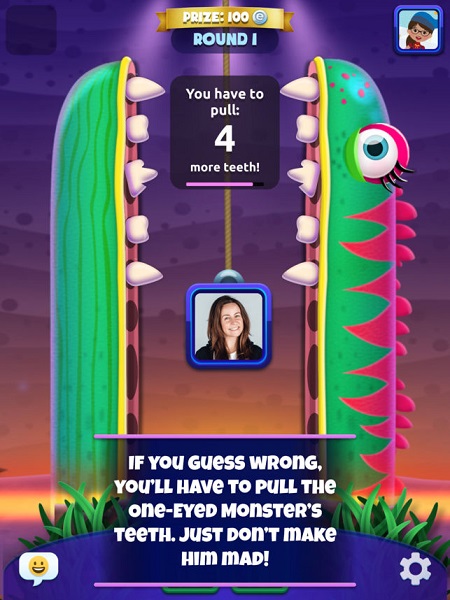 Hook said it was a natural fit to build a mobile game based on the Game of Games TV show.

“We iterated a prototyped a few different games before deciding on a multiplayer trivia game that mirrors the TV show in real-time,” Hook said.

The mobile game launched in December. In augmented reality games, developers create apps that can overlay an animated, digital layer on top of the real world. In this case, fans use their smartphones to capture data such as QR codes on the TV screen and then participate in activities where they can win prizes.

The show has a play-along challenge, where smartphone users can compete in live trivia contests to win instant prizes. The AR come in as a feature dubbed Game of Games Play Along Live. Clues jump off the TV screen into the phone. So far, the mobile game users have won more than $120,000 in prizes. 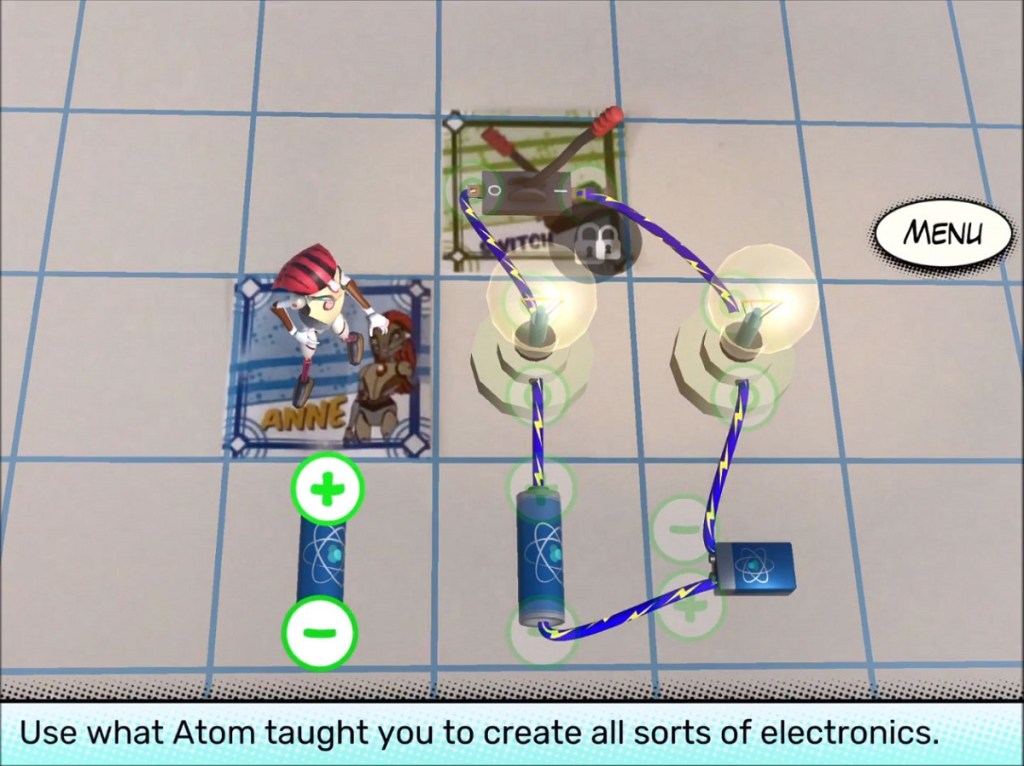 Above: HitPoint is working on this title with the NSF.

Lehrer joined Greenfield, Mass.-based HitPoint a couple of years ago, and she has been making games and apps for a few decades. The company has specialized in mobile games, but Lehrer has steered it into work-for-hire jobs in AR, like the Ellen gig. 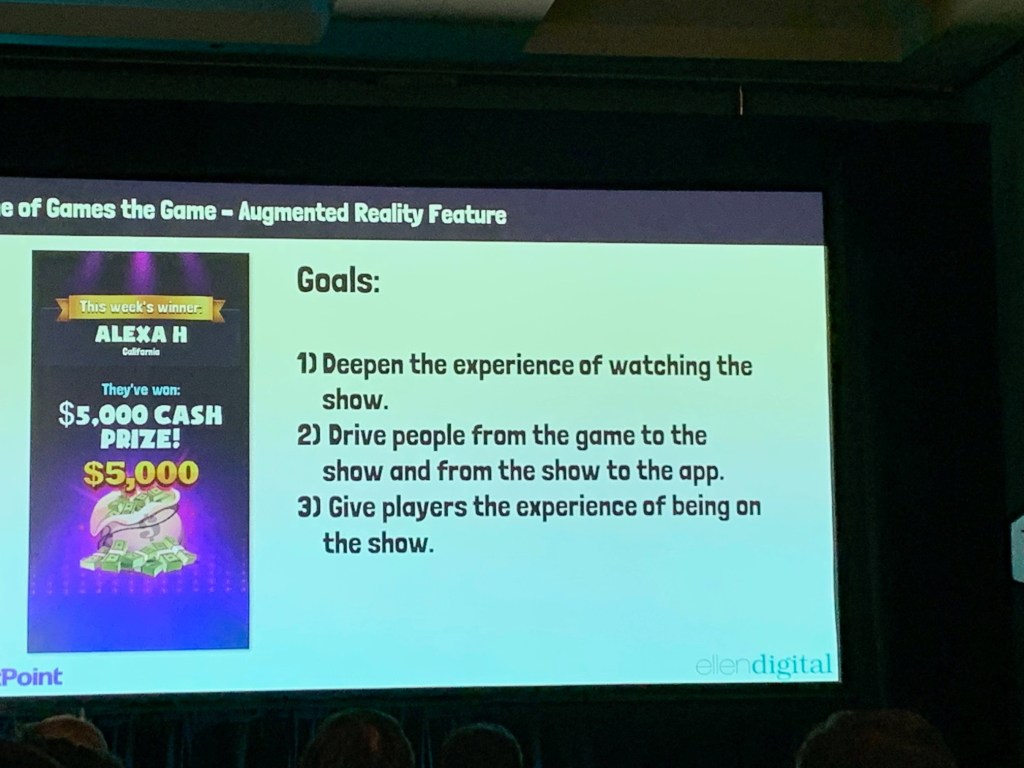 Above: HitPoint and the Ellen Degeneres Show had these goals for an AR game.

The 30-person HitPoint team used the Wikitude AR software development kit, which has been live since January and makes it easy to create cross-platform AR apps that use image recognition, object recognition, location, and tracking. It works with both Apple’s ARKit and Google’s ARCore.

“The game promotes the TV show, and it takes Ellen’s followers, who are not typically early adopters, and it teaches them how to use AR,” Lehrer said.

Hake said the challenges included targeting as many devices as possible across two platforms, syncing with the broadcast show, dealing with time zone differences for the audience, time issues due to broadcast preempts, huge volumes of sweepstakes entries, real-time results, and a lot of process and tech dependencies.

“We had to find a way to build an interesting technology and bring it to an audience that had never experienced it before,” Hake said.

Above: HitPoint is working on this app with a dental software company.

Outside of the Ellen game, HitPoint has created an app for a dental software company that shows people what their teeth would look like with braces on. Orthodontists can use this app to help people decide whether to get braces or not. I tried it out on Lehrer’s smartphone, and it even showed what I would look like with super-white teeth.

“We showed it at an orthodontia conference and they thought it was magic,” Lehrer said. “We’re now going into a second phase where we embed it in their software.”

HitPoint also created ColorBlastAR and a hidden-object puzzle-adventure game called Adera. To date, HitPoint’s games have been downloaded and played by more than 20 million people on mobile and Facebook desktop. Adding in their work-for-hire titles, HitPoint’s games and apps have had more than 50 million downloads.

And HitPoint is working with a National Science Foundation grant with Purdue University to develop an AR electronic circuit tool for teaching grade school kids. HitPoint is also working with Caesars Palace bars in Las Vegas on multiple iterations of an AR multi-user sports game. And it is working with Disney and Procter & Gamble on a Magic Timer toothbrush.

The variety of the AR projects is encouraging for Lehrer. As the world awaits the killer app for AR and VR, HitPoint can make a lot of money with all of the experimental and innnovative projects that enterprises and other institutions are commissioning in the AR space.

Lehrer thinks these projects are less risky than developing and publishing HitPoint’s own AR games, but that may come in time. There are other projects in the works that Lehrer can’t talk about yet.

“The Holy Grail is to find a project in AR that generates a continuous revenue stream and can scale,” Lehrer said.